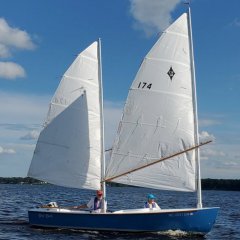 Here ya go, Pete. You already have a drill, right?   (Get ready to snicker...!)   https://www.amazon.com/Drill-Paddle-Outdoors-Pontoons-Watercraft/dp/B00KSWZZAA/ref=sr_1_29?dchild=1&keyw

Weeds are a little bit of a nuisance for a Spindrift as the dagger board is vertical and must be lifted up to free anything. The nesting boats have angled daggerboards.

There has been and there will always be a debate  among sailors about whether a motor is a necessary piece of equipment or an abomination, but on a Spindrift 10 set up for sailing, Really?