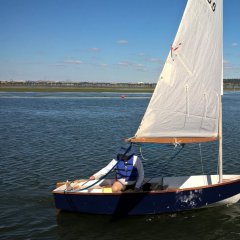 Got some more work in this weekend. Got the hulls sides joined and stitched on Saturday and today a friend came by for the unfolding. It looks like a boat! Pretty exciting.

Add a block of wood to raise the oarlock horns higher. If you look hard, you can see them on Turtler...

I got my gunwales installed. After asking for advice on the tip I ended up doing it wrong differently anyways. I placed the forward screws in the gunwales as far forward as I could now they're in the